The 10 Worst Floods In Florida History 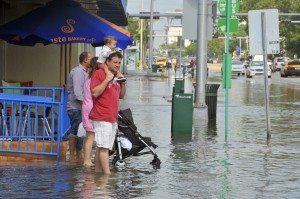 Florida isn't just surrounded by water on three sides. The whole state is built atop an organic network of underground aquifers connecting each and every lake, spring, inlet, and channel to the Everglades, Gulf, and of course the Atlantic. This is true from Pensacola to Key West.

Basically, you can't go anywhere in Florida without hitting the wet stuff, and sometimes the water hits back. Thanks to the bevvy of storms that pound the shores every year, flooding is a basic reality of life in the Sunshine State.

With that being said, here are the ten worst floods in Florida history.

10. Bonita Springs River Flood In 2008, hundreds of Bonita Springs residents were forced to escape their homes and seek shelter when the Imperial River overflowed from storms. Water from the river travelled wide enough to inflict severe property damage. 9. Tropical Storm Fay Hits Everglades City When Tropical Storm Fay hit the south Florida coast in 2008, Everglades City was dealt the worst blow. A storm surge of around 5 feet devastated the historic coastal fishing and tourist town. 8. Miami’s Growing Flood Problem In October 2013, Miami was experiencing massive flooding, not from a deadly hurricane, but flooding from normal patterns of high tides. A steady rise in the ocean level the past several years, created by effects of climate change, is altering life around the coastal edges of south Florida’s metropolis. 7. Inadequate Canal System Across South Florida By 1991, when Florida’s Sun Sentinel published an article detailing the state’s failing canal system and subsequent floods, unprecedented development across south Florida in the 1960s, 1970s and 1980s had led to endless flooded communities. Residents were warned to prepare for more. Built to handle water drainage from a rural Florida, the canal system could not move amounts of water brought by hurricanes and tropical storms out of modern developed areas fast enough. 6. Palm Beach County’s Mysterious Storm In 1984, an unnamed storm lasting for more than 48 hours flooded Palm Beach County. The effect was said to surpass effects of hurricanes and tropical storms. 5. Palm Beach County Meets Hurricane Irene Head On In 1999, Palm Beach County was severely flooded again. Hurricane Irene hit hard and flooded most of the South Florida county. 4. Miami Meets Hurricane Cleo When Hurricane Cleo made a direct hit on Miami in 1964, it was the first hurricane in over one decade to target the large urban center. Miami was ripped apart and flooded. 3. Flooding Across South Florida Now The end of April and beginning of May has brought historic flooding across Florida this year. Storms travelling through the southeast dipped down into Florida and created havoc. 2. Everglades City Destroyed In September 1960, Hurricane Donna was one of those momentous storms which left lasting memories in the minds of Floridians. Devastation, including flooding 8 feet deep, was so thorough Everglades City lost its distinction as seat of Collier County. Half of the town’s buildings were destroyed, the rest wrecked by flood waters. 1. The Tragedy Of Lake Okeechobee

The Great Okeechobee Flood is one of the most tragic events to strike South Florida. And it was detailed in dramatic fashion by classic American author Zora Neale Hurston in her famous novel "Their Eyes Were Watching God." Between 1,800 and 3,500 rural Floridians who lived around the lake are said to have died when 150mph hurricane winds sent water out of the lake and dumped it whole communities.