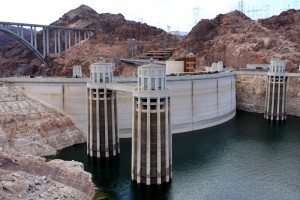 One reoccurring theme in human history is the constant battle to tame the wilderness, and even further, tame nature. The western United States is a prime example as once barren and desolate deserts were irrigated into green fields and their once uncontrollable raging rivers have been harnessed by wide scale damming. Even the Netherlands has defied all conventional logic and pushed back the ocean to reclaim tens of thousands of miles of land. In today's modern age, it's easy to think that nature is a conquerable force, but I feel that famed anthropologist Ernest Becker put it best when he stated, "Mother nature is a brutal bitch, red in tooth and claw, who destroys what she creates."

Today, one of the biggest looming issues is climate change and there is an overwhelming reservoir of data pointing the finger at humans and their ever-increasing carbon dioxide emissions in the last one hundred and fifty years. Despite a general consensus within the scientific community and academia on what is causing increasing global temperatures, there remain doubters. While I will leave you to decide on who you believe in the global warming debate, in honor of the conflict we will reminisce about the great climate-related calamities in human history.

In 2003, Europe experienced their hottest summer since 1540 and let me tell you, it was a real doozy. To give you a sense of just how hot it was, Paris normally experiences temperatures of around 65.7 degrees Fahrenheit in July, but in 2003 it exceeded 104 degrees for more than a week. Ultimately, the heat wave directly killed over 70,000 people and also devastated crops and saw massive spikes in food prices.

Year Without A Summer

In 1815, Mount Tambora, a volcano located in Indonesia, erupted so violently that it ejected 38 cubic miles of ash into the atmosphere, which led to a historically cold summer in 1816 which is ominously known as the "Year Without a Summer". Average temperatures across the world decreased by around 1 degree Fahrenheit, and while that may not sound like a big drop, it caused snow to fall across the Northern hemisphere year-round and crops in Europe, North America and Asia failed. An estimated 50-92,000 people died from starvation and cold weather.

For a country where a hot summer is considered 80 degrees Fahrenheit, a summer where it never goes below 90 degrees is just downright miserable. In 2010, Russia saw its hottest summer on record, which also led to uncontrollable wildfires, people boiling alive in their houses, and the release of dangerous levels of radioactivity into the air from radioactive materials catching fire. The heat wave was widely believe by scientists to be a result of global warming and nearly 60,000 people died from heat-related causes.

Why You Need Preventative HVAC Maintenance

Check Out Our Limited Time Offers!