A bright blue or purple flash explodes from the sky to the Earth, and in an instant the human it crashes through experiences one of the most historically fearsome natural disasters on the planet, the lightning strike. Unfortunately, Florida statistically leads the nation in human lightning strikes. More people have been killed, comatosed, and seriously injured by the brilliant jolts of electricity here than in any other United State. Safety experts warn that if you feel the hairs on the back of your neck stand up unexpectedly, you should dive to the ground immediately. In Florida, lightning can strike on a thunderstormy day, or out of a clear blue sky. To be sure, it is a scary phenomena.

Here are the top 10 worst Florida lightning strikes on humans.

10. On The Water A Florida fisherman was struck by lightning and suffered burns over 25% of his body sending him to the intensive care unit of an area hospital.

9. On The Links Golf should be fun, but for a 39-year-old man it was disaster. While on the 17th hole at a golf course in Bonita Springs, Dave Pirro was struck in the head by a single lightning bolt. He was revived, but later died at an area hospital.

8. On The Beach Relaxation on Belleair Beach with a friend resulted in tragedy for a 51-year old mother of two when a freak thunderstorm hit. The friend had left, but returned to her companion who was found lying next to the shoreline and was pronounced dead at the scene.

7. On The Water Front Enjoying the ocean view near Ft. Lauderdale with his girlfriend, a tourist was struck and killed from a single bolt of lightning. The girlfriend suffered burns.

6. On A Dive While scuba diving off the coast of Deerfield Beach in Florida, a 36-year-old man was killed after his oxygen tank was struck by lightning as he surfaced just 30 feet from his boat, resulting in immediate death.

5. On The Job Site Three men taking refuge under a tractor-trailer during a thunderstorm were victims of a lightning strike in Miami-Dade area. Two survived while the third was pronounced dead at the scene.

4. On The Field An 11-year-old boy was struck in the chest by a lightning bolt as he ran onto the field for an afternoon practice. He was revived, but eventually slipped into a coma at a Tampa hospital and died.

3. On The Grass A 30-year-old man was struck and killed while a freak bolt of lightning injured 18 soccer teammates. There was a light rain but no indication of imminent danger.

2. On Guard Being a lifeguard can be a dangerous profession. As a 21-year-old Tampa lifeguard helped people from a water slide during an impending storm, a bolt of lightning struck and killed him instantly. 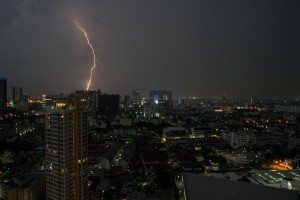 1. On A Mission A 40-year-old religious book salesman met his maker while peddling his wares door to door during a bizarre dry lightning strike. He suffered cardiac arrest and later died at an area Florida hospital. See Also: Max Mayfield, Former Head of National Hurricane Center, and South Florida Weather Hero A Short History of Hurricanes in South Florida The 10 Worst Floods in Florida History